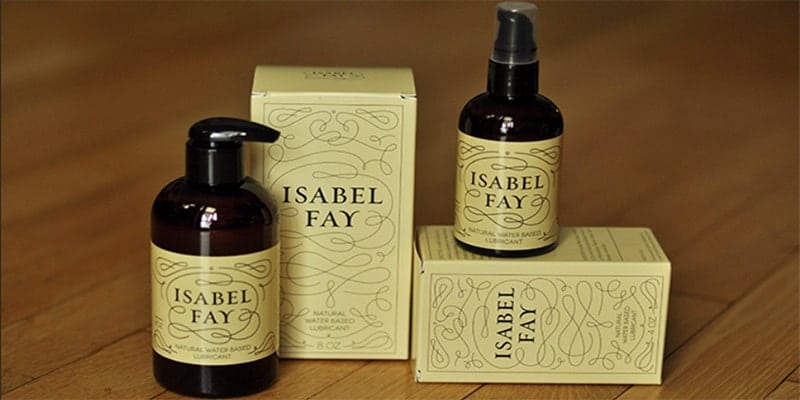 Isabel Fay is a premium water-based personal lubricant that’s made for both men and women. With Isabel Fay, you won’t feel tired, discomfort, pain, or lack of arousal during sex again. The lube is made with the finest ingredients to give you the ultimate feeling of comfort and pleasure.

I highly recommend Isabel Fay Natural Water-Based Personal Lubricant. In this review, I’ll reveal to you why I rate the lube so highly. Whether you have a partner or not, or use sex toys or not, this lube will give you sexual satisfaction.

Isabel Fay will help you satisfy your sexual desires, including your partner too. It’s time to transform your sex life from boring to interesting, and from pain to pleasure. You can achieve all that with this interesting lube made with ingredients that are safe and good for the body.

Isabel Fay doesn’t contain parabens, and glycerin like most lubes in the market today, and it works extremely well. There isn’t harsh chemical in the lube that’s bad for you.

Some customers have been using the lube for years, and they don’t complain at all about having any yeast infection as a result of using the lube too much.

When you buy Isabel Fay, you won’t be putting harmful chemicals into your body. Instead, you’ll have a lube that caters to your skin as much as it takes care of your desire to have pain-free sex with your partner.

The manufacturer has done a great work formulating a lube that’s unique and works very well without the need to put gross hormones and artificial crap into your body.

It’s compatible with most condoms

For anyone trying to avoid contracting sexually transmitted diseases, condoms are a must. And for people who want to avoid unplanned pregnancy, it’s best to use condoms. Condoms are the most popular type of family planning many people use today.

A lube that works nicely with any condom will make you happy. It means that you won’t need to read about the condom you’re buying to confirm if it’s compatible with your lube.

Isabel Fay personal lubricant lets you play with any condom. As long as you like the condom itself, Isabel Fay lube will work with it.

Isabel Fay Personal Lubricant is made in the USA

Last month, I came across a lube, checked the label and saw that it was made in the USA. However, after doing some little digging, I realized that the lube wasn’t made in the USA. It was actually made in India. This is a lube I’ve seen a couple of times on the web and in adult toy shops.

Great for women in menopause

Menopause isn’t the end of good sex. In fact, some women in menopause enjoy having more sex than some younger women. Vaginal dryness is a major issue most women who have hit menopause experience.

Isabel Fay Personal Lubricant is a great solution for women who have vaginal dryness in menopause. Old women tend to lose some moisture in the vagina as they get older. They are fewer fluids in there. Fewer fluids mean that they’ll feel some friction when the penis goes inside.

Isabel Fay looks and works exactly like the real fluids in the vagina. They’ll be no friction. There’ll be no pain. The lube is great for aging skin. It keeps it younger and healthy.

Few lubricant brands are bold enough to offer buyers 100% money back guarantee as Isabel Fay does. The company believes that customers’ satisfaction should always come first. I’ve bought Isabel Fay lube many times, and I haven’t had any issues with it.

It’s good to know that you can always request refunds if you aren’t happy with the lube. So, when you buy, and you’re not happy with the quality and feel of the lube after trying it the first time, you can send them an email, return the product and ask for your money back.

Although it’s rare, customers only complain about receiving damaged packages. The company is willing to send a replacement when you lodge your complaints. Replacement shipment is very fast too.

Some lube merchants and manufacturers don’t do that. There’s nothing to worry about when you buy Isabel Fay Personal Lubricant. You’re either satisfied with the lubricant, or you get your money back.

Isabel Fay is formulated with ingredients that aren’t harsh on the skin. The lube works gently. Women with sensitive skin can relax and have great sex with this lube. You won’t have to deal with any form of skin irritation as a result of using Isabel Fay Lube.

While the lubricant isn’t 100% natural, the manufacturer has done a great job to ensure that most of the ingredients are extracted from plants. I know some lubes will claim to be natural and still give you some reactions. This lube isn’t 100% natural, and it won’t give you any skin irritation.

Get Isabel Fay Lubricant at Amazon 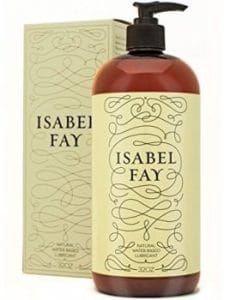 Isabel Fay is one of the coolest lubricants I’ve tried. I’m not surprised that it currently enjoys a high rating of 4.3 out of possible five stars on Amazon. Most lubricants don’t even have four stars. The lubricant works, and it has never disappointed my partner and me.

The lube is great for both quickies and long sex. I’ve had rough sex for over an hour with it before. I only needed to reapply the lube every 20 minutes. That’s long for a water-based lubricant. Most lubricants don’t last more than 5 – 10 minutes. Isabel Fay exceeded my expectations.

The lube is great for both old and young women. It feels a little bit cool in the vagina during and after sexual intercourse. The lube makes you feel satisfied. It’s hard not to love the lube after using it for the first time. Yes, I fell in love with it the very first day I tried it.

Stop wasting money buying the wrong lubes that don’t work. Isabel Fay is a lube that you’ll really get to like when you buy it. The lube is one of my favorite premium water-based lubes. It’s good for sex toys.

If you like playing with toys as I do, I’m 100% sure that you won’t want to stop playing with yourself when you use this lube.

If you’re looking for the perfect lube for sensitive skin, here you have it. After using Isabel Fay Water-Based Lubricant for about two years and reaching out to people who do, the lube doesn’t irritate the skin at all.

The lube feels nice during sex. It makes you want to continue having sex with your partner. It’s also a great lube for people who love to play with sex toys.

And if you’re not happy with the lube when you buy it the first time, you can gladly request for a refund. Take your sexual experience with yourself or partner to the next level starting today. Order an Isabel Fay lube today, and you’ll be happy in bed.

Spiceuplab.com is a participant in the Amazon Services LLC Associates Program, an affiliate advertising program designed to provide a means for sites to earn advertising fees by advertising and linking to Amazon.com